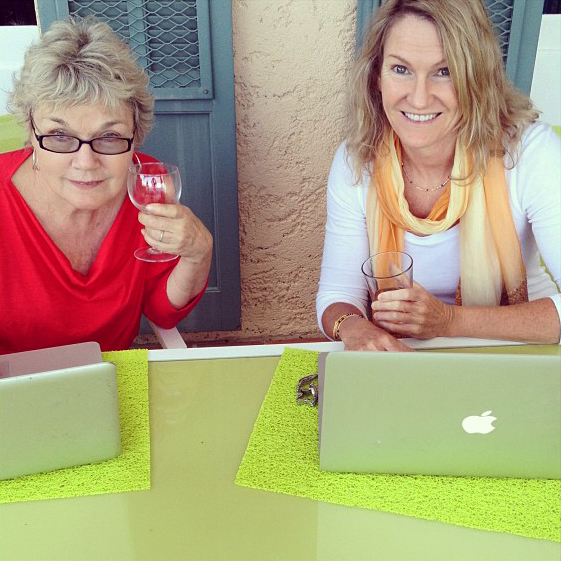 Our high-speed Internet connection makes Carcès an ideal hideaway for remote work. Writers, designers, artists and consultants have made our home theirs with their flexibility to work from afar. We also have a 110>220 transformer as well as French>US outlet adapters. We certainly prefer working in Provence to working in an office!

In fact, we have produced books and documentaries from this house – collaborating with colleagues from around the world thanks to the Internet.

True confession: We spent an entire summer revising the sixth and seventh editions of Ken's textbook, "Photojournalism: The Professionals' Approach." And we spent ANOTHER summer finishing the first edition of his book, "Videojournalism: Multimedia Storytelling." (All play and no work, you know…Actually, we don't REALLY advise this…but, when necessary, serious work in Provence IS possible!)

We also edited two short documentaries about non-profits in the Democratic Republic of Congo, where Betsy and friends are supporting the village of Lotumbe as well as Université Protestante au Congo.

Ken ALSO shot and edited an hour-long documentary about rosé wine with his iPhone (!) – La Révolution du Rosé. Á VOTRE SANTÉ! Ken's tutorials and short docs will introduce you to Carcès and its environs.

He also shot part of his hour-long documentary “Deadline Every Second: On Assignment with 12 Associated Press Photojournalists.” Watch for the welcoming mural on the road into Carcès from the north as he follows photographers covering the Tour de France!

And here is one that REALLY makes us proud. Margaret Atwood finished one of her novels during a winter stay chez nous.

WhatsApp and Skype are our telephone connections to the world. (Life wasn’t always so simple!) The biggest challenge in setting up HandUp Congo via FREE international conference calls on Skype was dealing with the time differences between France, Florida, and Sydney, Australia. When we tried to add Taipei, Taiwan, things became REALLY interesting.